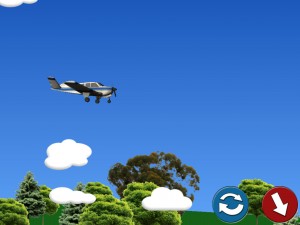 I’m on my lunch break at my day job and trying to sneak in some time to promote Fly Plane, my iPad game for kids that got released to the App Store this morning.

It’s always a mixture of exciting and really nerve wracking releasing something. Exciting to have a new game out there, and nerve wracking because of all the unknowns – Will some weird error I’ve never seen before pop up when other people play it? Will anybody actually like it? Will it work on the new iPad and its higher resolution screen?

The last app I made was Pogg a couple of years ago before even the first iPad was around. There was just the iPhone, and I think the iPhone 3GS had just come out, which was similar enough to the original 3G. My phone is still the old iPhone 3G, and my iPad is the old original iPad 1. Many people have probably moved on to newer models, and making a new game using older gear always has that degree of “man, I hope it works on all the new stuff”!

Still, Fly Plane was mostly fun to make, and the family and friends I’ve shown it to really enjoy it (then again, do family and friends feel kind of obliged to like it in front of me? 😉  ), and if it brings a few smiles to people out there then I’ve achieved my aim 🙂

The launch phase is definitely my weakness. I can make games, but I’m shocking at promoting them. I looked for Fly Plane on the App Store this morning and had to scroll through a few pages before finding it and was like “huh? I typed in ‘fly plane’ as my search term.. that’s the title of the actual app.. you’d think that’d rank first in a search.. why does it show other things first?!”. Then there’s the questions of what to write on this website, how to spread the word.. what do I write on Twitter, should I use my Pogg Facebook page to cross promote Fly Plane? I’ve done what many independent app developers do by having a prMac press release lined up to go out in a few hours, but do people ever read those? Or do prMac send out so many releases every day now that it just goes straight to the spam and ignore folders of the outlets that I’m hoping might write about the game?

Well, I’d better get back to work, and really I should be looking at today as a huge exciting happy launch day of a fun game rather than yet another administrative and marketing task to get through.

..so..putting my marketing brain back on, if you’ve lasted long enough to read to the end of this, then you’ve definitely got the stamina needed to pilot an aircraft – you should go get Fly Plane now! 😉