Pogg is doing well in helping kids with speech and language delays of various kinds including autism. It’s an app that has motivated kids to evoke their first ever spoken words and make their parents cry (in a good way!). It’s really heart warming and there’s some potential to work on further speech therapy apps with various institutions as well as my local special needs school. My next personal side project is pushing the technology to a more experimental and frontier area: controlling games with your mind.

I’ve had an Emotiv EPOC neuroheadset gathering dust on my desk for almost half a year, and it’s finally time to start working with it. It’s a headset that reads brainwaves and can track things such as emotional state, facial gestures, and you can even train it to recognise a couple of specific thoughts (such as the thought of pushing something or lifting it up).

If you have a spare 14 minutes, this TED talk will probably describe it best:

So, why am I doing this? Partially because I just think the idea of controlling something with your mind is heaps cool, but there’s a deeper reason that drives me in this direction too: 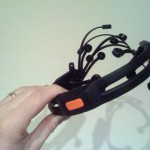 I love games, I love computers, I love using them for all sorts of fun, creative, entertaining and educational ways. I’ve been blessed with working limbs and senses and mind. Not everybody is that lucky, but that shouldn’t stop them from enjoying the same things that I do. There are some creative and brilliant games out there that only use one button, which is great for those people that only have a single hand or finger or even a sip/puff straw. I’d like to take that a step further, and see if I can make games for people that can’t even use those controllers, or that maybe need those devices for other things at the same time. I want everybody to be able to play.

My big dream is to go further than just games, and develop from mind-controlled entertainment, through to communication, then education, then to creating useful creativity and productivity tools for disabled people. Depending on how things such as the Emotiv EEG neuroheadset go, devices like this could become a useful bridge across language gaps, or help convey the feelings of people who just can’t communicate at all.

There’s a lot out there that I’d like to do and I have no idea yet how much is possible… but my life’s aim is to help people achieve things that they never thought they were capable of, and for now I’m making my little step forward with just a simple little mind-controlled game. 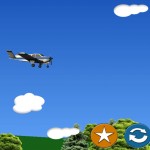 I’m going to start by converting my recent app, Fly Plane, into a fully mind-controlled version. The idea will be that you can make the plane fly around just by thinking to make it take off and move up and down.

When I get that working and out there for people to play with, I’ll just keep on pushing those boundaries further, and hopefully spread a few smiles and experiences to people along the way 🙂