Pogg is receiving a lot of warm endorsement and compliments from the special education community. It appears on lists of recommended apps for language development, and will feature in a positive case study in an upcoming Harvard publication of useful tools for helping children with autism.

Pogg’s magic in education is its simplicity, fun, and its representation of ordinary everyday words and actions that kids can relate to and practice. It’s silly and fun enough to be engaging and motivating, but it’s also animated realistically enough to work well with kids who are receptive to video modelling. 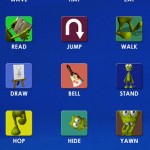 One of the most popular approaches with Pogg in special education is through Picture Mode, where all of Pogg’s possible actions are represented as colourful icons. A speech therapist for instance would hold up an iPad or Android tablet and focus on an icon, such as “Jump”. The children would be told the word, practice saying it back, touch the icon to watch Pogg jumping and then the therapist would encourage the children to explain it in a very basic sentence like, “Pogg is jumping”.

More ideas and resources for Pogg in special education will be available soon, but for now you can continue the conversation on Pogg’s Facebook page and chat to others about how they use Pogg.

Get Pogg for iPhone and iPad at the App Store

Get Pogg for Android at Google Play