Making something completely customised from scratch, and for under $100 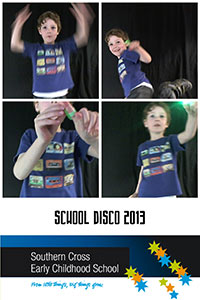 One of my kids goes to Southern Cross Early Childhood School, a fantastic early childhood school for kids up to year 2.

The major fundraising event of the year organised by the P&C is the annual school disco – music, face painting, food, glow sticks… and in 2013, my wife and I spontaneously volunteered to create and run a photo booth where the kids and families could take fun photos of themselves, and later get printed copies to keep.

I had never made a photo booth before, but within a week I had a complete booth prototyped and tested successfully for under $100, using a clever combination of customising off-the-shelf software, an existing laptop, HD webcam, a kids dress-up box, and house lamps with powerful bulbs and soft lampshades rather than a three-point studio lighting kit.

The system worked off a laptop which could be extended to another monitor to let the kids see themselves as they posed, and after taking a set of four shots, the photos would be combined into a single printable standard photograph size along with the school’s branding.

The photo booth was a huge success, and was eagerly requested to run again in 2014, and will return for the 2015 school disco.

Need Ricky to invent something totally new? Contact him here: